In 1954, it was decided to establish an observatory affiliated to Ankara University Science Faculty in order to start observational astronomy in Ankara, and Dutch astrophysicist Prof. Dr. Egbert Adriaan KREIKEN was commissioned. Due to the fact that the faculty buildings are in the city, a regional observatory was chosen in Ahlatlıbel after a long search for location by Prof. Dr. Kreiken, which is 18 km south of Ankara, far from city lights, easily accessible, and has approximately three hundred open observation nights per year. After the land was purchased, the preparation of the projects started in 1955, but the construction of the observatory could only be started in 1959. 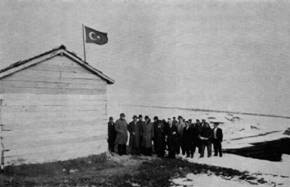 Beginning of the construction, 1959

Construction of the central building

A view of the finished observational facilities

General view of the observatory

A central building and three observation buildings were built, spending approximately one million liras of that time. With the completion of the observatory buildings, a radio telescope produced by the Dutch Postal Service, an astrograph with a 15 cm diameter f/10 focal ratio, a Zeiss Coude telescope made for 15 cm diameter solar observations, Hilger Watt microphotometer and Iris photometer were purchased and placed in the observatory.

The observatory was officially opened with an International Astronomy Meeting held on August 26, 1963. prof. Photometrical observations were carried out by Prof. Dr. Kreiken on the roof of the main building, photographs taken with the astrograph were examined in the Blink comparator, and interesting studies on variable stars, minor planets and comets were published. Sunspot observations were made from 1968 to 1989 using the radio telescope and the Zeiss Coude telescope in collaboration with the Zürich Observatory and later the Sunspot Index Data Center in Belgium.

In 1970, with Prof. Dr. With Herczeg’s suggestion, it was decided to make photoelectric photometry observations of stars. In 1975, the Maksutov Cassegrain telescope with a diameter of 30 cm and a focal length of f/16, purchased from a Swiss amateur telescope maker, mounted in the place of the astrograph. Prof. Dr. B. Cester from the Trieste Observatory made a photometer head for this newly purchased telescope. The first photoelectric observation at the observatory was made by Z. Aslan and Z. Tüfekçioğlu in the last months of 1975. Numerous national and international studies were carried out with this telescope, whose photometer head was renewed in 1991. In 2009, the Maksutov telescope was removed and replaced with a 35 cm diameter, state-of-the-art telescope and CCD camera purchased with a TÜBİTAK project.

A view of the astrograph with Dr. A.N. Eskioğlu 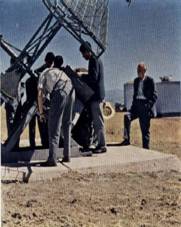 Mounting of the radio telescope (Prof. Dr. E. A. Kreiken standing on the right)

Recording devices of the radio telescope